There is a town in Texas called Irving. There is a small boy who lives there. He seems like a neat kid, from what I’ve read about him. He’s smart. He like to play with robots. He likes to build electronic stuff to see what he can make. He made a clock at home with a circuit board. It had a digital clock display, and a digital battery display. He took it to school to show his teachers, because he was proud of his accomplishment.

Did I mention that this kid’s name is Ahmed Mohamed?

Excuse me while I rage for a few minutes. While I do that, you should read what Ken White at Popehat wrote about this. He’s more articulate than I’m about to be.

Okay, you read it? Great. Now, will the Irving, TX police department and school administration please… 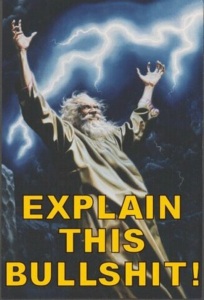 What the actual fuck is wrong with these police and administrators? Can they not hear themselves talk? Did their parents beat any and all common sense out of them when they were children? Did all of them fail shop class? And don’t give me any bullshit about how they didn’t have the chance to take shop, I’m pretty sure everyone involved in this situation is old enough that shop class was still offered, if it was offered in my podunk hometown.

The school system, the prosecutor’s office, the town, and the police department have likely all opened themselves up to lawsuits, and quite frankly I hope they get taken to the cleaners. Everyone involved with this horrible chain of decisions deserves to be fired. None of them, to my mind, are qualified to serve as dogcatcher, let alone in positions of authority and responsibility such as these.

I am an engineer. I did shit like this all the time when I was a kid. No one ever freaked out about it, no one ever called the police about it. Of course, I also happen to be white, with about as white a name as you can get, and I grew up mostly before 9/11, so OF COURSE it wasn’t an issue. I would bet dollars to doughnuts that if it was a white kid named John Smith who brought his homemade electronic clock to school in Irving, TX, he would have gotten extra credit for it in his science class, not gotten arrested. But because this poor kid is named Ahmed Mohamed, he got the full paranoid racist treatment. Because why on earth would a Muslim kid build something electronic if it WASN’T a bomb, right?

For our less astute readers, namely the Irving, TX law enforcement community and school administration, that last sentence is sarcasm. At your expense. Because you’re all fucking morons.

Goddammit, Texas. Grow the fuck up and join the twenty-first goddamned century. The grownups are tired of your bullshit.

I'm an engineer, brewer, vintner, gamer, hiker, biker, and many other "-ers" besides. I grew up in Connecticut, but now live and work in Delaware. This is where I put various ramblings and musings, as well as tasty recipes for beer. Yes, beer. I brew my own beer, wine, cider, mead, and other fun fermented beverages. It's fun, easy, inexpensive, and I love it. It's something I'd love to do professionally, but that's a plan for a future day. For now I work as a chemical engineer with a bunch of great people that I'm never going to talk about here. Have a great day, and good brewing to all!
View all posts by Josh →
This entry was posted in Uncategorized and tagged #istandwithAhmed, bad law, engineering, facepalm, idiocy, law enforcement, paranoia, ragequit, rant, school failure, Texas, WTF. Bookmark the permalink.